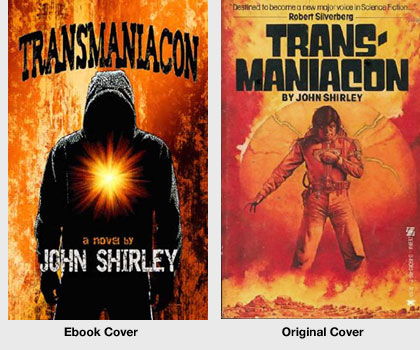 Destined to become a major voice in Science Fiction—Robert Silverberg

Foremost Professional Irritant, remarkable in acting both as burglar and inciter in the bizarre and pleasure-seeking world of the 22nd century is a fearless, ruthless man of ingenuity, completely overwhelmed with his own strength. His latest and most dangerous assignment is to steal

A dangerous and fragile device for the augmentation of the telepathic transfer of mania. By seeking out and amplifying strong, hostile human emotions, the exciter can turn a street brawl into a full scale war. As soon as Ben has possession if it he will have the power to destroy

The dangerous, grotesque, amoral world beyond the farthest reaches of chaos!

When I was really young I wrote a book called Transmaniacon main premise was—a guy wore the transmaniacon device, which enabled him to release hidden well-springs of "suppressed anger" in those he met. It was assumed those hidden wellsprings of fury could be found in anyone, somewhere hidden. This gave him the power to psychically manipulate crowds of people in certain ways—which is a hint about twentieth century history.

Transmaniacon is a super nutso off the wall original work of pre-cyberpunk science fiction that is like no other book I can think of. It is also a great work out-of-date old school science fiction... Transmaniacon is early work and does not show the mastery of of political allegory that Shirley became... A basic statement against the status quo most of all it is an excellent and imaginative piece of speculative fiction.

The dedication to John Shirley's debut novel, Transmaniacon, explains something (who knows what) about the young author:

Shirley created the prototypical sf punk novel with the dystopian Transmaniacon and demonstrated a hatred of the status quo, a theme often found in his writings. Transmaniacon is a more straightforward and simple book than Dracula in Love, even though both were published the same year. One suspects this may be the result of the author trying to fit into the expected science fictional mode of the day in order to make a first sale.

Main character Ben Rackey's talent is for disruption and his mission eventually involves inciting rebellion. He also demonstrates many of the attributes of the typical early Shirley hero—death-loving, anarchic, unconstrained by "normal" morality—but lacks character development. He's a bit too controlled to really rip. That he needs "the exciter" (aka the Transmaniacon)—a device that can enhance, even inflame, human emotion—to accomplish his role in the plot is almost ironic. Gloria, the supposedly tough-as-nails independent femme sidekick is similarly unconvincing; a case of an inexperienced writer relying on stereotype. Unlike the men, she doesn't even have a last name.

The author uses the infamous "infodump" method of exposition to cover a century of history—how "the Barrier" protected what was then the U.S. from the nuclear holocaust that wiped out the rest of civilization and the resulting effects on people, places, environment, and government within the protected area—and elsewhere. Rackey often just happens to possess needed knowledge at the right time and the plot is also full of similar conveniences.

Still, the book is alive with imaginative future scenarios (a decadent pleasure palace, sentient dolphin-lords who rule Houston and sacrifice humans for socio-religious reasons, Las Vegas hyper-gambling, genetically engineered flesh-machines, an aristocratically ruled Detroit) as the plot becomes something of a tour of the city-states of the former U.S.

Not surprisingly, considering the dedication, Shirleyian rock'n'roll references abound. (Muzak has evolved into "euphonium" used to dull the mind and the capacity for rebellion; rock, though extinct for a century, is the "only known musical structure capable of countering the euphonium." Songs by Blue Öyster Cult, the Rolling Stones, Alice Cooper, Pink Floyd, and the Beatles are mentioned.)

The beginnings of the author's fluid style and vivid cinematic imagery pop in here and there, as does some clever humor. Overall, the book's rapid pace sustain and entertain the reader through its less-than 70,000 words.

Considering the author's later anti-drug and addiction themes, it is interesting to find drugs (in this case, futuristic stimulants) seen as "good" and helpful.

The title and the fictional biker club members who had been executed 125 years before and revived from cryogenic suspension by the Evil Villain in the 22nd century of the story were inspired by Blue Öyster Cult's "Transmaniacon MC" (MC=Motorcycle Club). The song, from their debut album, Blue Öyster Cult (released January, 1972), was an "elegy to Altamont."

Matt Silcock, in a feature for Grace and Fury, gives an accurate description of the track:

"Transmaniacon MC" is the blasting opener, a hammer-down minor chord riff that slams into a wild descending chromatic run. Add psychedelic organ by Lanier or Bloom and you're space-truckin' into Deep Purple territory; top it off with the totally unique (nothing like Ian Gillan) soulful sneer of E. Bloom, singing lyrics which obliquely refer to evil Hell's Angels and the disaster at Altamont, and you've got the beginnings of BOC's trademark cryptic menace.

With Satan's hog no pig at all
And the weather's getting dry
We'll head south from Altamont
In a cold-blood traveled trance
So clear the road, my bully boys
And let some thunder pass
We're pain, we're steel, a plot of knives
We're Transmaniacon MC

Cry the cable, cry the word
Unknown terror's here
And won't you try this tasty snack
Behind the scene or but the back
Which was the stage at Altamont
My humble boys of listless power
We're pain, we're steel, a plot of knives
We're Transmaniacon...

Look, all right! You can feel it!

Some Other Blue Öyster Cult References in Transmaniacon: 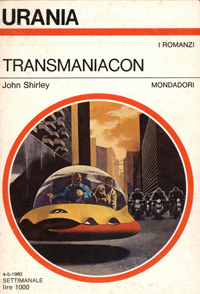 Some Other Odd (and Not) Facts About Transmaniacon: