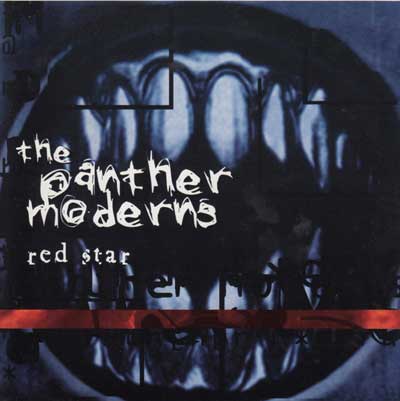 Unique, post-punk, neopsychedelic, semi-industrial, definitely listenable music with words veering into prose and the poetic: John Shirley and The Panther Moderns offers eleven songs, stories, and rants with John Karr (who did the music) on guitar and keyboards, Mike Derry playing bass and complaining a lot, various other musicians, and some machines handling the percussion. (Released: 1996)

Buck Dharma, Blue Öyster Cult: John Shirley's knuckleball vocal delivery and images of hip, horror, and humor work hand in fist with John Karr's compelling guitar-meets-techno sonic stew to create grooves that you catch like a cold. These tunes grow on you like fingernails. They're relentless, and they scratch that itch!

Note4Note Magazine: John Shirley is clearly inspired by Iggy, but a lot of good rock artists have been. The Moderns don't play—they brood. That is, this isn't good time music, but brooding, unsettling, thought-provoking, punk-derived rock 'n' roll. Not that Red Star suffers from a lack of humor—the album is, after all, "dedicated to the memory of FZ," and if that isn't Frank Zappa then I'm not short of cash. But tracks like "200,000 Homeless Children," "Hope There's a Hell" and "Mountain of Skullz" go for the dark side. "See You in Black," which has been performed by Blue Öyster Cult...is another good song. The Panther Moderns, in mood, style and content, seem much more in synch with the tenor of the times in which we live than a good 95 per cent of the bands out there. Red Star is a work that deserves to be heard.

Black Sheets Magazine: Red Star works influences from classic bands like The Stooges and MC5 together with a tech-heavy, industrial sound. The guitar work by John Karr reminds me of Voidoids-era Robert Quine, but Karr has his own unique edge. Red Star mixes heavy thythms and restless melodic exoprimentation, blending it all together into an acerbic cocktail of noise. (RECOMMENDED)

John Everson, Nightsongs: Featuring the vocals and lyrics of John Shirley, The Panther Moderns is an independent act that melds an '80s guitar and keyboard attack with a dark sensibility. The influence of Shirley's better known profession is easily heard on "Hope There's a Hell," "Mountain of Skullz," and "See You In Black." While, for the most part, this disc doesn't go anyplace new musically, it's a trip to hear Shirley's Iggy Pop baritone croon and cackle darkly around the twine of guitars and drums. There's funky guitar riffery on the humorous rapspeak of "Not Who I Am" and the album's best (and most purely Shirley) track uses instruments only for atmosphere: "Dominant Impulse" is a creepy answering machine monologue about a group of freaked out murderers among the drugged-up X set.

Along with John Shirley (vocals and lyrics), the core of the Panther Moderns were John Karr (who did the music) on guitar and keyboards and Mike Derry playing bass. Karr also served as Live Sound/Recording Engineer.

The band's name came from William Gibson's 1984 novel Neuromancer, in which they area cybernetic street gang that uses media manipulation as a tool for terrorist acts. Lupus Yonderboy is their leader.

As Larry McCaffery notes in Storming the Reality Studio, both punk and cyberpunk aim to seize control of technology from the "banalizing effects of the media industry" (producers) so as to "re-establish a sense of menace, intensity" (1991, p. 289).

This sense of implementing technology as a weapon against itself, or more specifically, the mechanisms of control, is acknowledged in Gibson's Neuromancer through the Panther Moderns, whom Case [the book's protagonist] describes as "mercenaries, practical jokers, nihilistic technofetishists" (1984, p. 75). The Panther Moderns, it is explained, differ from other anarchist groups "in their degree of self-consciousness" and in their "awareness of the extent to which media divorce the act of terrorism from the original sociopolitical intent" (1984, p. 75). In preparation for their assault upon the "Sense/Net building" (1984, p. 80), for example, Case, Molly, and Armitage enlist the help of the Panther Moderns, who aptly reflect their capacity to subvert the mechanisms of control for their own purposes: The Panther Moderns allowed four minutes for their first move to take effect, then injected a second carefully prepared dose of misinformation. This time, they shot it directly into the Sense/Net buildings internal video system. At 12:04:03, every screen in the building strobed for eighteen seconds in a frequency that produced seizures in a susceptible segment of Sense/Net employees [1984, p. 80].

There are at last two other bands who use(d) the name. An indie heavy metal group from Providence, RI and another from New York.

Steve Moore, a New York City-based multi-instrumentalist/producer/film composer best known for his synthesizer and bass guitar work with Zombi, released a three-song techo/electro EP in 2012 named (along with the opening track) Panther Moderns.

The wind plucks at your black lace gown
You're standing calmly beside his grave
I see you there in black
Gently smiling and oh so brave
Love to see you in black.

You're the Reason (on BandCamp