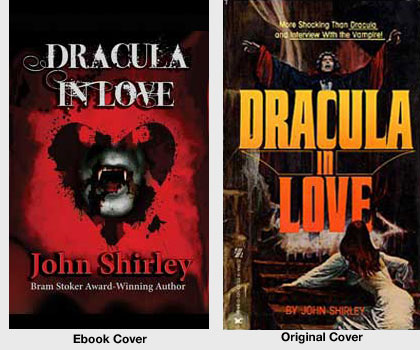 Although Dracula in Love was not published until after Transmaniacon—both in 1979)— it is the first novel John Shirley wrote. He started writing it about age 17 while living in Portland. Somewhat given to youthful excess, Dracula in Love is still a remarkably readable book and displays the unique and energetic imagination that marks all of Shirley's work. The book's protagonist discovers (at age 33) he is the son of the being upon whom so many tales are based, but this creature is even more powerful and frightening than the myths have made him to be. Ignore the stereotypical shtick cover, Shirley's updated Dracula possesses (or is possessed by) a sexual organ with eyes and inhabited by its own predatory spirit as well as an appreciation of the contemporary submachine gun. Publishers have attempted to fob the novel off as "romance" or "erotica." It is definitely sexual, but many modern readers will find it as too much of a reflection of its time and rape culture.

William Gibson has called it "an amiably twisted psycho-sexual footnote to Bram Stoker." Author Nancy Collins has said this novel inspired Sunglasses After Dark and its protagonist Sonja Blue.

John Shirley on Dracula in Love:

The story starts with Vlad the Impaler in modern times—you find out about this tragedy in his life that propels him into vampirism. He's at war with God. So it's a broad coincidence. It's a very intense, twisted book fueled by my adolescent sexuality which was running my life. It was my puerile attempt to make a mystical statement. At the end of the story, Dracula gets absorbed by this earth goddess. Actually, he's drawn into her vagina and goes through a transformation, recognizes his true nature then goes into a communion with God. All this is part of a vampire novel which must have totally baffled most vampire novel fans."

This was originally published in 1979, and while trace marks of the Groovy Age are still visible in some books and movies that late in the decade, this is really much more a part of newer trends that were just beginning to emerge—it's identified as a precursor of splatterpunk (Shirley is also credited with having put the "punk" in cyberpunk in other early novels), for example.

That cover illustration suggests something in line with Hammer flicks or the Tomb of Dracula comics, but this is quite far removed from those. True—Dracula is a supernatural entity here, who drinks blood, commands rats, interacts with other supernatural entities like Lucifer and sea-monsters and zombie-like lesser vampires, etc. but he's also been modernized in a number of ways, some of which have become familiar through other more recent incarnations of the Count (such as his tolerance for crosses, to pick a more superficial example), and some of which still retain their freshness (such as his more contemporary outlook, motivations, and psychology). I'm sure a lot of people would enjoy such revisions, and I must admit Shirley executes them with talent and authority, but I found them gratingly dissonant. So although I can admire this novel, in a way, on a more fundamental level I really did not enjoy it.

Vlad Horescu is a computer programmer/executive at a large corporation with lucrative and classified government contracts. He learns, to his dismay, that he's Dracula's son, and that his father now has use for him. Interestingly, after he shares some blood with Dracula, he has visions that essentially allow the novel to shift between his first-person point of view and a third-person point of view of Dracula. I'm afraid Shirley overuses this device, but it does come off quite cleverly up to a point. Anyway, Vlad finds himself also being manipulated as the pawn of Lucifer, who has his/her/its own plans for Dracula.

Would I recommend this? It is well-written, but it will appeal far less to a traditionalist when it comes to vampires (as I am) than to readers who find more traditional depictions of Dracula "cliche" and in need of updating.

Review of Dracula in Love by Serhiy Krykun

It's hard to believe the novel was written by an 18-year-old guy! But it just serves as a proof how talented John Shirley is, a natural born writer. I loved the cross-cultural references and how freely Shirley treated the image of Dracula, but in this freedom he managed to preserve the classic feel to him— it is the Dracula we know, although he looks a bit different and is sporting military fatigues. I loved the lengthy baroque descriptions and the potent imager—Dracula crushing the crucifix and squeezing blood from the tine Christ on it, for example. And I was amazed how close Lucifer's revelation of his true looks was close to Arthur Machen's description of Pan. It's not flawless (Vlad sounded too young for an adult and the climax begged to be more intense and violent), but I thoroughly enjoyed the book— it's a daring and imaginative novel that predated a lot of splatterpunks.